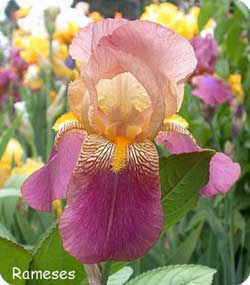 With the discovery of the tomb of Tutankhamun in 1922 by Howard Carter a wave of Egypt-mania swept the world and washed across America with much excitement. Egyptian motifs were all the rage in fashion, art, advertisements and movies, and the public eagerly followed the news of Carter’s expedition in the newspapers and on the radio. Under the spirit of this national fad Hans Peter Sass of Omaha, Nebraska, brought forth his introduction for 1926, which he named King Tut. A fine tetraploid variegata with heavily bronzed standards over velvety red falls. Mr. Sass considered this his finest breeding iris and made extensive use of it in his hybridizing program, however it failed to win any awards. In 1929 he followed this same theme when naming his latest creation – a soft rosy-toned variegata that was a child of King Tut. He bestowed the august name of Rameses upon this variety, not knowing how apt it would become in just a few short years as Rameses blazed its way to the top of the iris pyramid in 1932 by winning the AIS Dykes Medal.

The name Mr. Sass chose for his top rated creation reflected its parentage, as the king for whom it is named came to power just 30 years after the death of the boy-king Tut. Pharaoh Rameses I was most renowned as the founder of the 19th dynasty of Egyptian rulers, and took the throne around 1295 BCE. Though not of royal birth, he had served in high office for the previous Pharaoh and was appointed his successor to the throne when no heirs were produced. His reign was short and unremarkable, being just 16 months on the throne, but he did father two of the most renowned Egyptian Pharaohs in his namesakes Rameses II, also called Rameses the Great, and Rameses III. A total of eleven dynastic rulers took the name Rameses over the next 130 years, until the close of the 20th dynasty in 1069 BCE. 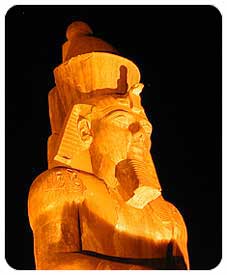 Statue of Rameses II at the Temple of Luxor. © Matthew Floreen

Rameses II, ‘the Great’, was the grandson of Rameses I and reigned for 66 years before being laid to rest in the Valley of the Kings at the age of 90. He constructed many of Egypt’s most impressive ancient monuments, including the renowned archeological complex of Abu Simbel. More statues of Rameses II exist than of any other Egyptian pharaoh. At least as early as the third century AD, he was identified with the pharaoh of whom the Biblical figure Moses is popularly believed to have demanded that his people be released from slavery.

Renowned as a warrior, Rameses III fought off incursions by ‘the Sea Peoples’ during his reign in the Twentieth Dynasty from 1183 to 1152 BCE. Considered the last native Egyptian pharaoh to wield any real authority, he was responsible for one of the largest and grandest of the tombs in the Valley of the Kings, as well as important additions to the temples at Luxor and Karnak. Under his rule the illusion of peace and stability remained, though it was to be short lived. The pharaohs who followed Rameses the III reigned as Egypt continued its slide into chaos and civil war that would eventually see the once great nation lose control of the lands along the eastern mediterranean and the south into Upper Egypt, and would eventually end the 20th Dynasty. 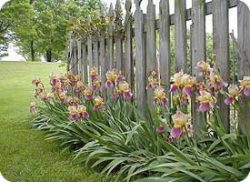 Just as the names of these pharoahs is carved into history for all time, Rameses the iris has proven its immortality over the decades as one of the hardiest and most vigorous of the old survivors. Seemingly to be found across the country on abandoned farms, along alleys forgotten and neglected, or tucked away in the corners of older gardens, it never fails to deliver a spectacular show and is much loved by those who grow it. Its legacy lives on in its offspring as well, notably in Frank Adams (Laptham, 1935) which inherited its vigorous growth habits when crossed with pollen parent Jerry – a cross which also gave us the remarkable red of Christabel. We also have the Dykes Medalist for 1953, Truly Yours (Fay, 1948) from crosses involving Rameses and Dr. Kleinsorge’s Far West. A cross with the 1939 Dykes Medalist Rosy Wings brought forth Autumn Sunset, which was an important parent in the lineages of modern reblooming irises. Surely this champion has earned its regal name and its place in the sun in iris history.

[The spelling of Rameses used here for the pharoahs is the same spelling as listed in the checklist for this iris, however it may also be commonly spelled “Ramses” or “Ramesses” in reference to this line of Egyptian kings.]