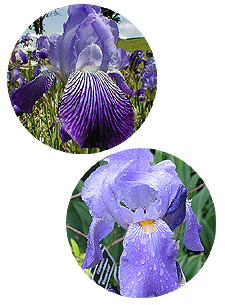 You can visit the most important historic site in the development of garden irises by taking the Paris Metro to the Belleville station. As you exit the station, turn south and cross the Rue de Belleville. The next street you come to will be Rue Lémon. This small street, located between Rue Denoyez and the Boulevard de la Villette, is named for Nicolas Lémon (1787-1836) and his son Jean-Nicolas Lémon (1817-1895). Nicolas Lémon founded a plant nursery in 1815, a 3 Rue Denoyez, just outside the Bellville gate. Jean-Nicolas Lémon was only 19 years old when his father died. He took over the nursery, and launched an era of modern garden irises.An article in the Revue Horticole in 1839 commented on Jean-Nicolas Lémon’s wonderful iris collection. The following year, 23 year-old Jean-Nicolas Lémon published his first list of iris cultivars. He clearly indicated which were his own seedlings and which were older varieties. Included on this first list were such famous Lémon cultivars as Honorabile, Jaquesiana and Edina.Lémon was the first plantsman to list large numbers of new iris cultivars, most of which were given common, rather than latin, names. Paradoxically, two of the three cultivars I have cited as examples of Lémon’s most famous iris have names derived from Latin: Honorabile and Jaquesiana. ‘Edina’, the old poetic name of Edinburgh, was made famous by Robert Burn’s poem Address to Scotland, which begins: “Edina, Scotia’s darling seat…”.

Lémon’s irises were distinctive, and most were of finer quality than old cultivars with which the garden public was familiar. The Lémon nursery already had considerable renown throughout Europe for its outstanding peonies and pelargoniums, and it soon acquired fame as the leading purveyor of garden irises. The nursery in 1844 introduced the cultivar that was probably the most beloved iris in the 19th century: Mme Chereau.Belleville, in the last days of Lémon’s early work with irises, was just beyond the walls of the city of Paris. It was an area of numerous small farms and vineyards. Belleville was also one of the places that the poorer people of Paris went to drink and dance on Sundays and Holidays. Wine and food were much less expensive than in the city proper because they were not subject to custom duties on goods that passed through the city gates. The light wine produced on the hills around Paris was called guinget and the little cafés, often with dance halls, where the wine was served were called guingeiettes. One of the most famous guingeiettes was Ile d’Amour, which was located not far from the Lémon nursery.Today Belleville, which was annexed by Paris in 1860, is a working class quarter. When you exit the Belleville metro station, you are in the middle of Chinatown. Many of the cobblestone streets are narrow and there are many small markets, shops and, of course, cafés. Belleville is in many respects a village in the heart of modern Paris.

When you visit Belleville to see where Lémon developed his wonderful new iris cultivars, do not miss the chance to visit one of the most attractive parks in Paris: the Parc de Belleville. This park overlooks the entire city. You can sit in the park and view the Panthèon, Notre Dame, The Hôtel de Ville, the Invaides, the louvre, the Eiffel Tower, the Arc de Triomphe and the grandeur of the city.A short distance from Belleville is one of the most famous cemetaries in the world: Père Lachaise. here you can see the graves of such luminaries as Balzac, Proust, Bernhardt, Chopin, oscar Wilde, Maria Callas, and Edith Pilaf. Alas, Lémon’s grave may not be in Père Lachaise, but his memory is alive on the little Paris street that bears his name, and most certainly is alive in our gardens.[varieties pictured from top to bottom: Faustine, Celeste, Mme Chereau, Jaquesiana, and Honorabile.
Please see corresponding gallery photos for credit and full varietal information.
This article is from Vol. 16 Issue 2, Fall 2003 issue of ROOTS.]