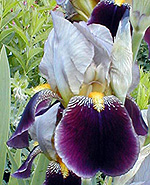 I occasionally have someone ask “What do you want those old things for?” as I am curiously begging for a bit of some old iris growing by their alley, that happened to catch my eye as I wandered past. I just mumble something about being a collector and not having that color – I mean sure I have pink, but not that pink. I usually offer to bring a start from my garden in return, but few take me up on it. Truth is I am fascinated with old noids, as we irisariens term those irises whose names have been lost. There is something of the mysterious and magical in a flower that has thrived on neglect, being passed along from hand to hand, garden to garden. How many folks passed out starts to dear friends to brighten their gardens? There must have been many cast off bits that grew where they landed in a forgotten corner or the edge of the compost pile, and in time thriving enough to colonize large swaths of the back alley. Church sales, farmers markets and pass-alongs to the kids as they start new homes, some of these old beauties really get around. Others remain where they started while families come and go around them, sometimes even outlasting the homes they used to border.

Most of my collection has come from swapping with other gardeners all over the US. Seems almost everyone has some kind of old iris that they’d love to trade for a different color. I especially like noids that have come down thru families, and have living memories attached. One of my favorite oldies, Honorabile, came to me from a woman who had brought it from her mothers home, who got it from her grandmother before that. Its family name was the apt and very charming ‘bacon & eggs’. Knowing they were treasured by others makes them even more special to me. I also have several that once grew in the gardens of my grandmothers and great-aunts. They are a living trigger to childhood memories of warm spring days in grandma’s garden. I look forward to passing them on to my younger relatives when they have their own homes. 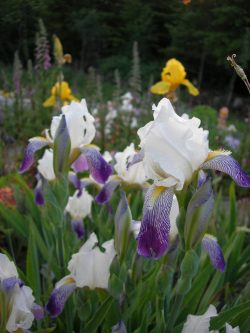 Occasionally I manage to get one of my dear oldies identified and the name is once again attached to the flower. Of well over a hundred unknowns in my garden, only two or three a year manage to be reunited with their proper moniker. Most are not distinct enough and will probably never be ID’d, but they are no less beautiful and appreciated. It is fun to peruse old catalogs and share pics with older irisarians to see what clues can be found that may lead to the right name. Often it is necessary to acquire a properly named one to grow for comparison. Imagine the excitement on the day they both open a bloom together and a match is made! Oddly enough, they are just as appealing when the mystery ends.

Some old varieties seem to be scattered all over the place in the spring. In forgotten flowerbeds and along alleys and old homes these noids await spring sunshine for their chance to be noticed again, if only for a short time. I’ve found names for some over the years; others still wait. In Olympia I see the old red Indian Chief and the classic Lent A Williamson quite often. President Pilkington in buff and lavender is also very common. Wabash makes an appearance here and there as does a sky blue noid that is almost, but not quite, a twin to Great Lakes. A dusty old gold iris grows happily behind the Jiffy Lube on the east side, ignored and forgotten until the clump bursts rapturously into bloom each may, catching the eye and showing off. A small forgotten alley downtown hosted a patch of noids that bloomed cream with a golden-brown plicata. Down the street from there is an old Victorian house turned into apartments and fronted with a huge bed of Crimson King. By far the most common variety seen is iris pallida, the original species iris from which all tall bearded iris are descended. It’s tall stalks and grape-scented periwinkle blooms grace many a garden around town, in huge clumps that bloom with profusion. Beloved of English gardeners, I can only imagine they were carefully carried along by the Sound’s English settlers in earlier days. It has thrived in our Mediterranean climate, so like its homeland. It even has a fairly common twin that is a deeper blue and the petals lack the faint pink wash of the classic pallida, but is otherwise identical in every way. It’s been suggested it may be Albert Victor, but I’ve yet to be able to verify that. 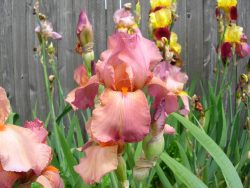 So if you enjoy the smooth elegant form of historic irises take a chance on a noid next time someone offers a rhizome or two from their old patch. You might just get a new treasure for your family to love.