The 1991 National Convention showed us more than a few Siberian Irises in bloom, many of which were gen-u-ine antiques. Since several of the tour garden owners are active HIPS members, it is not surprising that a number of older Siberians are grown in Region 4.

For example, Caesar’s Brother was seen blooming uniformly well in almost every tour garden – further evidence of what a stellar performer it is! I found several beautiful oldies which I had ‘seen’ only in print and I came away with at least a dozen of these antiques on my 1991 iris Want List. How wonderful that Siberian cultivars don’t go “out of Style;” that the form and color of Nigrescens (1875) is just as pleasing as any of the more recent offerings – that Nigrescens is a proven survivor is a real plus for the Sib fancier.

Back to the subject at hand: OK, so beauty is in the eye of the beholder, but I wasn’t the only one taking notes and making lists during the convention tours.

In seeking information on some of the older Siberians that I subsequently ordered, I was struck by the fact that only 17 Siberians had won awards between the years of 1920 and 1961, and the same chosen few seemed to win them all. Only 6 failed to go on from HM to the coveted Morgan Award. While most were familiar to me, a few were not and I wondered what has happened to some of these cultivars? The deeper I delved, the more questions I had. For instance:

Why were so few Siberians awarded HMs?

Siberians in the 1940s were awarded the AM. Why were no more AMs given until the 1986 award year when the Morgan Award was elevated to medal status and became the Morgan Wood Medal?

Why were no Morgan Awards given between 1955 and 1961? Award Reports in the Minutes of the AIS Board do not address this. Indeed, the only Siberian awards given in this entire 6 year period were HMs to White Swirl and Royal Ensign.

The World of Iris states that there were 17 Siberians registered before 1900. Can anyone provide a list of these? Can anyone account for the whereabouts of all 17?

Were the 4 HMs awarded in 1961 the direct result of increased interest sparked by the activation of the Society for Siberian Irises in 1960?

What did the British know that we didn’t? They gave Royal Horticultural Society AMs and HCs right and left – even awarded one Dykes to a Siberian [Anniversary 1979] and another to a Siberian hybrid. [Noname 1976 – both by Mrs. Marjorie Brummitt]

All the Siberians listed below were registered and introduced in this country; no species or collected 40 chromosome cultivars are included; irises are listed by date of the HC/HM Award: 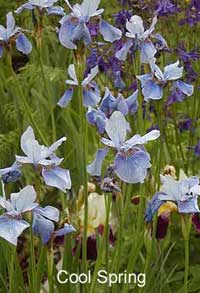 I would like to share a couple of interesting bits of iris trivia which came to light.

Several people had a hand in getting this article onto the page. My thanks to: Harry Kuesel for suggesting where to begin; Joan Cooper for bringing my attention to the Knowlton listing in AIS Bulletin #130, thus saving me hours of research; Howard Brookins for the Siberian Check List; and my husband who went through this Check List page by page to glean award info for the years 1953 to 1961.

I realize that I have posed a number of questions and made some observations which are open to conjecture. Aside from my burning desire to mount a ‘Search and Rescue’ mission on my own behalf, I hope this article will provoke some response from ROOTS readers and increase awareness of just what worthy garden plants these older beauties are – and how important it is to not let them be lost.

How many of these Siberians are preserved in your garden?

[The following comments came in response to my article on Award Winning Siberians which appeared in the Fall ’91 issue. That these people read the article and took the time to respond is gratifying indeed, both to the author and to the editor. Thank you all. – Anne Lowe]

…in response to your question Why no more AMs til 1966?: The AIS awards system was changed several times over the years, and from 1951 to 1966 was a period when no AMs could be awarded to Siberians. The first Morgan Award was given to Tycoon (Cleveland) in 1951. Prior to that, the highest award a Siberian could receive was an AM, except of course the Dykes which almost always went to a tall bearded. When the Morgan Award was established it became equivalent to an AM. So, for all these years from 1951 to 1966 when the Morgan Wood Medal was established, there were no AM Siberian winners. When the Morgan award was elevated to Medal status, this made room for AMs again in the Siberian awards structure….

Who was Frank Stubbs? He was a father-in-law of Fred Cassebeer’s that Fred admired very much. But Fred’s wife was in public relations work and quickly recognized that an iris with a name like that which was not known to gardeners would prevent it from getting very wide recognition which is richly deserved. So she persuaded Fred to change it to a more descriptive name which caused him to choose White Swirl. I used to work on Manhattan Island on 40th Street and Madison and Fred, who was a pharmacist, owned an old fashioned drug store on upper Madison Avenue. It was just a 2 mile walk for me to go up and see him, which I often did several times during the bloom season. We always discussed what was new in Siberians and he was very pleased with the new recognition White Swirl got when he changed its name.

Why no Morgan Awards between 1955 and 1961? This was a period when there was very little improvement in these flowers. Bill McGarvey was one of the first to recognize the reason for this. Why? Because the bees always got there first and made a bee cross. So he tore off the falls to remove their landing platforms and covered his crosses to avoid contamination. Since the bees mostly crossed similar Siberians with one another, there was little chance for improvement. Most of the introductions were field selections of bee crosses at that time. Bill changed all this and as soon as he began to hybridize them, others like Bee Warburton and Currier McEwen did too and then improvements came quickly.

Royal Ensign – does anyone grow it? I first saw Royal Ensign in Tom Hall’s garden in the Syracuse area during the 1959 AIS convention. Bill McGarvey used it to develop his pink Siberian line. I’m pretty sure it is still being grown in the Central NY Iris Society area. Suggest writing to Jane Hall to find out more specifically who has it.
Harry Kuesel, AZ & CO

…I have been doing Siberians seriously for about 40 years, and bought my first ones about 60 years ago. If I can find the energy, I might write you a piece about it. On page 18 that picture of Caesar’s Brother is beautiful – shows the very distinctive shape of the falls perfectly. However, 1 do not think the Mountain Lake picture is right. The one I had about 1960 was a quite broad petalled flower, much more worthy of an award.

You say Rimouski was the first repeater registered – I hadn’t heard that. I thought Scheffy’s My Love was the first. Could you give me the reference for Rimouski repeating?
Sarah Tiffney, MA

[Sarah is absolutely right – the Mountain Lake picture caption was switched with the Cool Spring caption. Mountain Lake is the clump shot and Cool Spring is the mug shot. Sorry about that – I’ll have to speak to my layout man – again!! The Rimouski reference came from The Siberian Check List.]

And yet another editor speaks!
…Re your article on page 18 about AMs for Siberians. AIS bases the number of awards on the number of cultivars introduced and Sibs were only awarded one AM which was the Morgan Award just as the Payne Award presently is an AM for Japanese. In ’86 because of increased interest in Sibs, the number of AMs was increased to three and the Morgan elevated to Medal status as you noted.
Judy Hollingworth, MI

…The Siberian Check List lists Dr. Marc Simonet as the source of the Siberian Grey Prince. I believe this is incorrect and that Hendree Paine Simpson of Virginia, as listed in some current catalogs, was the correct grower. The confusion probably came from the abbreviation in the ’39 Check List which could apply to both names. Also, Nigrescens (Van Houtte 1875) has been omitted from the current Siberian Check List but is alive and well in some gardens. It is parent to the famous Caesar, etc.

…In a tentative list of the 17 Siberians listed in The World of Iris, I count 18 but perhaps the W. of I. authors didn’t count Euterpe (Dammann 1874)??
Richard Sloan, AR