Collectors of old irises (or old roses, daffodils, etc. ) soon encounter the “Nameless plant.” [Now often termed ‘NOID’ – No I.D. – in iris parlance – Ed.] The first brush with this creature may be the mis-identified plant: the one you acquired as Such-and-Such but which proved to be not that item. The avid collector determined to retrieve old irises from cemeteries, roadsides, old homesteads, directly and knowingly enters the “Nameless Plant” realm – frequently hoping that identification can be made after a bit of study.

Sooner or later, then, all of us are likely to discover the pleasure of detective work. And almost immediately we discover the pitfalls, frustrations, and blind alleys that go with it. Basically, the problem is this: we will have before us a living individual, all of whose characters we can see at a glance; but where do we find good written and photographic material to give us the detailed information we need to distinguish our unknown individual from other similar irises? 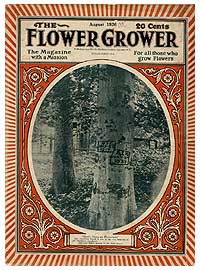 If we have access to old iris catalogs, they’re usually the first reference tool in an identity search: their pages tend to be packed with descriptions of a great number of irises. But catalog descriptions focus on the flowers; and, since sales is the motive, these descriptions emphasize the good and novel points while ignoring or down-playing the negative. Hyperbole is rampant: “monster blooms;” “best blue;” “flawless form;” etc. AIS Bulletins and BIS Year Books may offer more realistic descriptions, though you’ll find your share of unhelpful tersities such as “worthless;” “not in a class with So-and-So;” “over-rated;” and such. With the proper resources and enough time, you may find helpful information gems tucked away in old gardening publications such as The Flower Grower or The Gardener’s Chronicle.
Left: The Flower Grower, August 1926

Photographs sometimes will come to the rescue, showing details that written descriptions fail to mention. But so few irises were photographed relative to the number of irises that were put into circulation. Earliest photos were black-and white, but if they’re clear photographs they can show well all details other than color. Many of the early color plates in catalogs were hand-tinted – sometimes very well done but in some cases with rather bizarre results that wildly overemphasized color. And to muddy waters further, some of the less-scrupulous catalogers (never anticipating our needs) would apply different names to the same color photo in subsequent catalog issues -leaving you to wonder which iris name (if any) was correct. The Robert Wayman catalogs are probably the worst offender; the large suppliers – Pattison, Schreiner, Cooley – are virtually 100% reliable.

Another frustration is repetition. You may find the same description or descriptive phrase in a number of different catalogs – just as you will find the same photo used over and over again. Only persistent searching will unearth snippets of detail that will begin to round out the repeated basics. Detective work therefore can become major paperwork as you jot down possibilities and then comb “the literature” for further details to add to your bodies of evidence.

You can see, then, that trying to pin a name on a nameless iris is both a detective project and an obstacle course. Is it possible to succeed? Yes, and no. The “no” is obvious: insufficient evidence to make an I.D. The “yes”, though, can be of two kinds.

The only sure identification of an unknown comes when you can match it with living material of a correctly-named plant (one that has been perpetuated with its name attached). Thus, if your nameless murky blend proves to be the same as my Alcazar (which came from someone who bought it as such, ‘way back when), then you have a certain I.D. Lacking this confirmation, the best any of us can say is “probably” or “most likely” for any proffered identification made solely from descriptions and photographs. That’s not to say that you may not be absolutely correct in your conclusions. But given the lack of richness in “the literature” and the fact that you will not have evaluated every possible description and photo, it would be inaccurate to announce positive identification (not to mention misleading, should you be wrong).

Lack of positiveness on your part need not cause despair or discouragement. There is the chance that your tentative identification may be conclusively proved or denied by another grower of historical irises. For example, you might share your “probable Alcazar” with someone who grows the iris and have your educated guess confirmed when they match up at bloom time. At worst, your speculative I.D. may prove incorrect – also an important step in an identification process (“I don’t know what it is, but I do know it’s NOT Alcazar”).

As you collect and study your unknown irises, there are three activities that will greatly aid your research: 1) keep records on your unknowns, 2) photograph them for off-season reference, and 3) share the irises. Especially, record the source of each of your unidentified irises and assign to each some sort of simple “garden name” (or number) for easy reference. Through sharing, you will find that some unknowns were widely grown in their day (your Roanoke lavender may equate to my Mendocino mauve, for example). This minimizes the confusion, as we share and compare, that can result when one unknown iris is passed around under a number of separate “garden names.”

Following is a lengthy list of descriptive points that, taken together, will form a “profile” of an unknown iris suitable for distinguishing it from virtually all others. It may appear daunting to make notes on all these aspects (and I confess that this is a “do as I say, not as I do” proposition!), but by training yourself to observe details, you will amass data that will make your excursions into “the literature” more fruitful.

Points Of Identification: Tall Bearded Irises
[Note: size, height, profusion of bloom are RELATIVE qualities. Good or poor culture will influence all three, but the differences in size and height, in particular, will remain fairly constant.]

I’ve put together a printable version of this checklist you can download. The file is in PDF format and will open with Adobe reader. There is room for notes on individual irises. Click below to download:

relatively long or relatively short
narrow or fairly broad
flat, slightly curled at tips, or distinctly curled in upper quarter or so
carriage: stiff or lax (tips bend over) [Note: size of fan/length of leaves is not always an indicator of ploidy; some diploids (e.g. Thais, Floridor, some pallidas) are large while some tetraploids ( e.g. King Tut) are quite small.]
surface: smooth or noticeably ribbed

blue green, with glaucous ‘bloom’ on surface (as in I. pallida)
“average” green
yellowish green

short: buds so close to stem that stem intersects virtually all open flowers – a pallida characteristic
med: (average): open flowers generally carried far enough from main stem so there’s no interference
long: lowest branch often has one or two sessile buds or even a secondary branch

A. Number: per placement (terminal, each branch), and total per stem

totally scarious (papery) as in I. pallida,

all green
tinged with red to purple (lightly or heavily?)
inflated

shape: circular; oblong; ovate; obovate; fiddle-shaped [note if standard is fairly flat or curves back noticeably from the midrib]
carriage: arching (tips touch) or overlapping{both are dome-shaped}; broadly rounded (globular as in some arilbreds); conical; open (anywhere from slight gap to broadly open or cupped); floppy (upper portion may flop inward or outward – sometimes entire petal may do so; this may be due to poor substance [see later] or midrib that fails to support entire length of the standard)
margins: ruffled, waved, smooth, laced

Standards — markings: note veins (amount and color) at base of petal; wire edge of darker or contrasting color around petal edge
Falls — markings: haft veins; plentiful to absent; color (and background color); narrow to wide spacing; conspicuous dotting – with (or instead of) veining

Style arms and crests — color(s) of each

pollen: present or absent (sometimes anthers may be fully formed but fail to release the pollen – this is worth noting)

F. Texture (separately for standards and falls, if they differ.

Color is the most difficult part of the profile – bad enough when you’re trying to describe a self-colored flower, progressively more difficult as you attempt to describe multicolored and blended blossoms. The various color charts (RHS, Ridgeway, Maerz & Paul, etc.) are good to use IF you have one because you will have a definite color reference that will be understood by anyone else having the same color chart. But most of us will have to wing it, going with ‘wisteria lavender’ or ‘grape purple’, or something.

I worry that this may be off-putting. I produced the material as I did to encourage people to look at details and not to rush to conclusions.