Home > Library Item > Irises of Note: The Story of Dominion 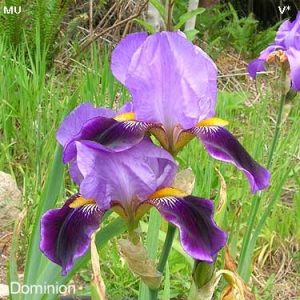 One of the most popular and also one of the more controversial iris of the early 20th century is DOMINION. It was the creation of Arthur Bliss, a retired British civil engineer, who with the encouragement of his friend W.R. Dykes , took up iris breeding as a hobby in the English countryside. Bliss was trying to create a ‘redder’ iris, when he crossed the rosy CORDELIA, a diploid, with Macrantha, a purple tetraploid collected species from Asia Minor which had some reddish undertones. In 1905 only two seeds were harvested from CORDELIA’s pod. They did not germinate until 1907, and one later bloomed in 1909, a deep purple bitone. Bliss was somewhat disappointed, as he was expecting a redder flower. It was only in 1910 at its second flowering, that it caught the eye of Bliss’ 10 year old niece, Phyllis . It might have been just ‘another purple’ but its falls were velvety, with great substance, quite unlike either of its parents. There were some that doubted its alleged parentage. Amos Perry felt that his BLACK PRINCE was somewhere in its lineage.

None the less, DOMINION’s tribulations were only beginning. It did not grow well for Bliss, and although he tried to get commercial nurserymen interested in buying it, none would take it. By 1917 Robert Wallace, head of the famous iris nursery of Colchester (later of Tunbridge Wells) saw it and was so impressed that he purchased the entire stock for introduction into his catalogue. Despite the fact that it was wartime in Britain, Wallace promoted this new iris, placed its picture prominently in his catalogue, described it in glowing terms, asked an outrageous price for it, and was successful. The reign of DOMINION had begun.

Here is the way Wallace describes it in his 1922 catalog: DOMINION (Bliss 1917) “A wonderful iris, in a category all its own, and the forerunner of a new race on account of the extraordinary development of the fall. S of Dauphin’s blue or light bluish violet, large, erectly held, well developed and slightly veined. F. of exceptional substance expanding at the base to a deep rich indigo-purple velvet. Beard orange, very pronounced. The plant is strong and vigouous, the sturdy spikes are freely bourne. Foliage very broad and blue green 2 feet”. He quotes ‘the Gardeners Chronicle, May 27th 1922:

“The marvellous Dominion shown from Mrs. Taft’s Cincinnati garden was the sensation of the Show, growers from all over the country collecting before it with deep interest. This iris is…exceedinigly rare…Dominion took first prize for a specimen stalk.”

DOMINION also proved initially difficult to breed. It was somewhat sterile until it was crossed with Trojana Superba, but fortunately the velvety falls with great substance was a trait that was transmittable to its offspring. The first crop of DOMINION seedlings bloomed in 1918-19 and included such as CARDINAL, MAJESTIC, MOA , GLAMOUR, SWAZI and BRUNO, all glorious in their own right. More and more hybridizers began using it as a parent, and its offspring were known as the ‘Dominion Race’ in the iris world. DOMINION was used as a parent in the US and in France, where the iris breeder Cayeux used it in his breeding programs. DOMINION’S ‘line’ continued to dominate the iris market for the next dozen years.

However, it was not without its share of detractors. DOMINION had poor branching, holding its flowers too close to the short stems, giving an awkward and bunched up appearance. Additionally, it was a slow grower, difficult to breed, and had to establish itself before giving a satisfactory display. On one hand it was celebrated as a milestone in iris development, on the other, constantly criticized for its faults. Bliss worked on developing better DOMINION progeny, including the beautiful, but also slow growing GRACE STURTEVANT ((KNYSNA x E.H. JENKINS) x DOMINION).

Wallace catalogs are full of the best DOMINION children and grandchildren. Here are a few featured varieties offered in 1927.

BRUNO (Bliss 1922) Described as “an iris of exceptional quality, considered by many to be Mr. Bliss’s best seedling. The standards are bronze, tinted and lightened with lavender, shading to yellow at the base. Falls deep rich red purple of exceptional size and quality”.

CARDINAL (Bliss 1922) “One of the richest flowers of the DOMINION race. A fine outstanding plant, rising to a height of three feet, with stems showing a tendency to branch. Standards of a distinctive shade of lavender, overlaid with rose, carried erect. Falls rich prune purple…somewhat rounded, very broad and of wonderful glossy texture”.

DUKE of BEDFORD (Bliss 1922) “A magnificent iris with typically large, well formed flowers of great substance. The standards are rich violet and the falls a far deeper tone, almost black purple in certain lights with a reddish sheen under violet veins”.

SWAZI (Bliss 1922) “Magnificent flowers strictly on Dominion lines, but not quite so wide at the haft. The color of the fall is brighter than Dominion being of a reddish violet, clear and bright, but not with quite the same intensity, nor perhaps the richness of colour as its parent, but this is more than compensated by the magnificent habit and carriage of the plant”.

And Wallace’s own creation: MELCHIOR (Wallace 1927) “along the lines of Mrs Valerie West,with the flowers evenly spaced on three foot stems, and in no way crowded. The flowers are large with semi-flaring falls. Standards of deep bronzy violet, falls of massive substance, rich velvety crimson purple. The whole is lit with a bright golden beard”.

In the US, DOMINION was recognized as being a top iris by Qualty Iris Gardens in its 1926 catalog. “It seems to be universally conceded that the Bliss Dominion strain is the finest single Iris strain in the world. For velvety substance of falls and rich, deep intensity of coloring, they are in a class by themselves.” Quality goes on to address the two greatest alledged faults of DOMINION: First that it is a ‘poor doer’, Indicating that it takes time to ‘acclimate’ to gardens in this country …it took two years to get established, but now, as evidenced by its low prices, it has adjusted and is a ‘good increaser'”. As for its poor branching, Quality only mentions it, and does not elaborate or make excuses.

With the introduction of Mrs. VALERIE WEST in 1925 (a grandchild of DOMINION via BRUNO), Bliss felt he had taken the DOMINION strain as far as it could go. She is described by Wallace as “an improved BRUNO, what more can be said? It bears immense flowers with broad massive standards, bronze shot with lavender and deep purple velvety falls of immense substance and perfect shape. Very free flowering, the flowers have the additional quality of being very lasting”. Ayers describes it on his visits to Bliss in England as ‘the most perfect iris I saw’…to be seen and enjoyed as an individual not a clump”.

Thurought the 30’s DOMINION is often offered in catalogs as a ‘breeder’s’ iris, rather than a collector’s or garden specimen iris. Seeing that it stood about 30″ tall (and that too, in the style of the day was probably exaggerated) its value was primarily in its ‘velvety’ genes.

After enjoying a decade or so of popularity and acclaim, DOMINION’s appeal faded, and now it and its early progeny are somewhat rare in current historic iris collections . CARDINAL seems to be an exception and is still popular as an historic iris. While it inherited the ‘family falls’, perhaps it was genetically luckier than its brothers and sisters in its relative vigor and hardiness. DOMINION was known even in its heyday as a poor increaser, but more than likely, other improved iris took its place, and the iris world moved on to newer more exciting developments. DOMINION and its first and second generation children are hardly seen in catalogs after 1940.

But one thing does remain. The legacy and genes of DOMINION – its strong and velvety falls – live on in many prized and popular iris of today.