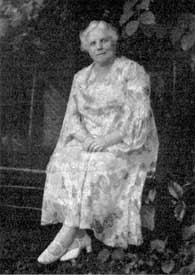 Grace Sturtevant was born in 1865 in Boston, Massachusetts, one of 4 children born to Edward Lewis and Mary Mann Sturtevant. Her father was the first Director of the New York Experimental Station in Geneva, NY. Grace was 12 when her mother died and she assumed the running of the household for her father and siblings until her father married again. At this point Grace was able to continue her formal education. A graduate of the Museum of Fine Arts in Boston, this eldest Sturtevant daughter used her talent to create many drawings and colored sketches of plants to illustrate her father’s botanical studies

Grace and her half brother, Robert Swann Sturtevant, born of the second marriage and nearly 25 years her junior, were always close and shared many common interests, especially after she introduced young Robert to irises and educated him extensively about this flower. In 1901 they co-purchased Wellesley Gardens. She was keenly interested in the breeding and distribution of good irises and by 1915 the Sturtevant iris plantings became the place to visit during bloom season. Miss Sturtevant began hybridizing irises in 1910 and in 1912 her first seedling of known parentage flowered.

In 1917 three of the seedlings (Afterglow, B.Y. Morrison and Shekinah) she took to the Massachusetts Horticultural Exhibition won medals. These cultivars laid the groundwork for the fine varieties of later years as well as establishing her as an iris breeder of note.

Grace introduced many irises in the years 1917-1920, putting out her first commercial listing in 1918. The irises selected for introduction and listed in these early Glen Road catalogs were based largely on the judgment of others, especially Arthur Bliss of England with whom she had much correspondence. However she quickly developed confidence in her own judgment and in her own cultivars.

Miss Sturtevant found the study of genetics and color absorbing and recognized early on that color was what attracted the gardener. A prolific breeder at a time when little work was being done with irises, she produced better yellow-toned irises as well as plicatas which expanded the color range of this class. She once stated “Color in mass is perhaps the greatest contribution the iris can make to the garden picture….” Thus it is not surprising that color became the foremost factor in her selections for introduction. Her philosophy regarding criteria for introduction of new varieties included the following: “Good substance and form, attractive coloring and above all, a pleasing balance of the whole are prime requirements; height, branching and size (qualities which give balance) are merely desirable. New introductions must be distinct, preferably in color as that receives general acknowledgment. Varieties showing a mere improvement or a slight variation on tone have no place among high priced ‘novelties’. (Novelty was the term then used for a new introduction.) There is no one ideal type. While many old favorites are good en masse, the demand is for novelties — new color combinations or unusual colors with increased height and size. If a variety has individuality and (to some) is pleasing, that seems a good reason for introduction, though good growth habit, form, etc., should be considered. A high standard is a necessity for a breeder if his introductions are to be of a permanent value.”

Our Grace did not hesitate to critique her own creations harshly if she felt they deserved it. In several instances she pulled cultivars off the market before they had a chance to be distributed. In 1932 the AIS Symposium established new standards and set forth the final votes on the introductions of 1917-1918. As a result she heartily recommended that nearly 10% of her introductions be discarded by every grower and she gave a reason for discarding each variety. Some of the reasons: innocuous variety; poor form; weak growth; not sufficiently distinct; irregular shape; slow rate of increase; too common coloring and unpleasing tonality. One was even labeled as a “real mistake”. (This is honesty at its best. Current hybridizers take note!)

During the years from 1915 to 1925 Miss S. provided the first example of following a hybridizing goal through to completion. She envisioned a yellow iris with the size and habit of I. pallida that would thrive in southern California where the older yellows from variegata parentage were not happy. After three generations of breeding she obtained Shekinah, the best yellow iris of its time. From it, through a long series of crosses, came the large yellow cultivars which followed. (Afterglow was a happy by-product in generation two.) Primrose (1925) with its better form and deeper yellow coloring became preferred over Shekinah and Gold Imperial (1924).

The first varieties of a rosy-pink shade, Dream and Wild Rose, were originated by Miss S. in 1918 and 1921 respectively, and enjoyed enormous popularity. An important parent. Rose Madder, introduced in 1920, is in the parentage of Dykes Medalists Dauntless, Rosy Wings and Coralie.

From the very beginning she also introduced many Intermediate (IB) and Dwarf (DB) varieties, some of which can still be found in the gardens of collectors: IBs Myth, Empire, and Bluet (which was a personal favorite of Miss Grace) are in my own collection. I do not know if any of the dwarfs have survived. I find it interesting that she regarded the short ones as useful in the garden. Sturtevant “shorties” were highly regarded by Ethel Anson Peckham in her quest for the development of table iris and Gold Imperial is classed today as a true MTB. Among the first (1917) tall bearded Sturtevant introductions still grown today are Afterglow, Queen Caterina and Mother of Pearl. Valiant (Sturtevant-Mitchell 1937) is believed to be the last registration bearing her name. This iris with its blue and gold standards atop reddish veined wisteria falls rimmed gold resulted from a cross made in Mitchell’s California garden many years before. It was introduced by Elizabeth Nesmith in 1937-38.

Miss Sturtevant struck a blow for Women’s Lib by taking part in an endeavor generally reserved for the male gender. Seemingly unimpressed by her own talents and ably assisted by her English friend Violet Edlmann, she regarded herself as “an elderly lady with a hobby.” It is not surprising that she was both a founding member and Life member of the American Iris Society and she urged other members of her sex to become interested in iris culture and continue her pioneer work in developing the iris.

Grace Sturtevant was awarded the AIS Gold Medal in 1935 and the Foster Memorial Plaque in 1938. Since her irises provided foundations for subsequent generations of hybridizers one might wonder why she never received the AIS Hybridizer’s Medal.

In 1945 Grace’s increasing poor health led to the sale of Wellesley Gardens and her death in 1947 marked the loss of America’s First Lady of Iris.