By George Waters, OR 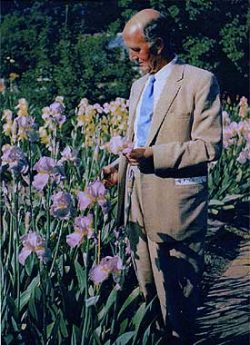 This letter is prompted by the recent reading of the Fall ’02 ROOTS. In the issue mentioned, Ms Munro makes passing reference to a book by Harry Randall, called Irises (not Iris — Harry knew the proper, if too seldom used, plural of iris). It is a book that deserves more recognition than is usually given it, for its forthright and personal style. Harry was a man of strongly held opinions unflinchingly expressed. (As chairman of the Central Electricity Generating Board, a position of national importance in post-war Britain, he confronted the striking electricians’ union with a few home truths. His remarks were widely publicized by the press, giving great embarrassment to him and the government. The faux pas probably cost Harry the knighthood that customarily follows a term in so responsible a job.)

But that forthrightness, coupled with a subtle sense of humor, made Harry a popular speaker at iris conventions, and during his frequent visits to the US he was often the guest of honor. One of those occasions was an AIS convention in Chicago (perhaps during the 1960s — I have no handy reference to consult) where a recording was made of Harry’s after-dinner speech. A copy was made on an oversize LP disc for Harry himself. The copy was given to me by Mrs. Randall on Harry’s death, but is no longer in my possession. Perhaps the person responsihle for making the recording could dig up another copy.

Harry’s visits to this country were, of course, primarily for the tall bearded irises that he loved and grew well in Britain. These visits became an almost annual event. He greatly admired the work of U. S. hybridizers and purchased large numbers of their new creations, thereby ensuring wide distribution in Britain. My own garden benefited considerably from his generosity.

He was made welcome in this country by iris hybridizers such as Dave Hall, Orville Fay, and Jesse Wills. Neva Sexton, whose iris New Moon earned the Dykes Memorial Medal in 1973, spoke of Harry with particular warmth; when Harry learned that Neva’s medal had not arrived from England, he had one of his own Dykes medals (he won four, I believe) re-engraved with her name and sent to her. (Dykes Medals are awarded by the British Iris Society and the American Iris Society recommends a recipient to the BIS, usually each year.)

It was Harry’s practice to invite a few members of the BIS to his home in Beaconsfield to hear him read recently completed chapters of his book in progress. The guests were expected to offer criticism of the work, but Harry’s formidable reputation tended to inhibit comment. My own attempts to meet his wishes on these occasions earned the gift of a carload of recently dug rhizomes. Harry’s manuscript was almost complete when he died, and, with final details attended to by Mrs. Randall, George Preston, and other friends, Harry’s Irises was published posthumously.

[Please see corresponding gallery photos for credit and full varietal information.This article is reprinted from ROOTS, Vol. 17 Issue 2, Fall 2004. Read an excerpt from Irises on the ‘Irises of Note’ page for the story of Snow Flurry]
Help Preserve our Iris Heritage