In the first two decades of the twentieth Century iris hybridizing in France was dominated by the firm of Vilmorin, Andrieux et Cie, an old and honored firm owned and operated by Papa Vilmorin and his two sons. They were the first to hybridize and introduce into commerce irises bred from the newly discovered tetraploids from the near East. In 1904 Oriflamme, Isoline and Tamerlan appeared. These new irises were seized on avidly by many hybridizers, and had an enormous impact on the development of our modern hybrids. 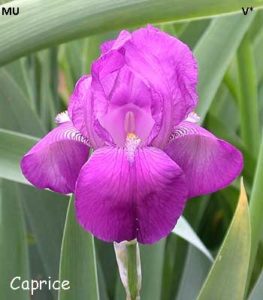 Let us examine briefly, in chronological order, those Vilmorin irises that are still grown today.

The oldest surviving Vilmorin iris is Caprice which dates to 1898. It is a small flowered, shorter iris in medium rosy violet and is not a very profuse bloomer for me.

Of the famous 1904 introductions, Oriflamme has been lost. Tamerlan just recently rediscovered and made available commercially, is possibly the first tetraploid hybrid – this is of major historical importance. It is a medium deep lavender bitone and very vigorous. Not all Vilmorin irises were tetraploids; Isoline is a triploid, grown today more for its significance than for its beauty. Its rosy mauve coloring is somewhat muddy and the falls are long and narrow. It is an indifferent grower and bloomer.

Not so Monsignor introduced in 1907. Judging from the many old gardens in which this may still be found, it must have been very popular. Two factors are involved: it is a vigorous grower and a prolific bloomer. Not quite a tall bearded, it makes and attractive clump with its dark purple blooms whose falls have the added attraction of deeper purple veins which give the flower the appearance of stripes.

In vacant lots, beside highways, and in new and old neighborhoods, you may find Alcazar which dates from 1910. This is probably more widely grown today than any other historic hybrid iris. tall, and a vigorous grower and increaser, with a handsome bloom in two rich tones of purple, it is a survivor par excellence.

Also from 1910 is Eldorado, popular in its own day, but not widely grown now; a short iris of attractive coloring, the standards are blended violet and bronze while the falls are bright violet and yellow.

Three varieties have survived from 1911, the least well known being Cherubim. this is a rather insipid iris of washed orchid and darker veining – much more effective in the clump. Far better known is Archveque, a short early blooming, rich purple bitone with rather small flowers. Even more important is Parisiana, often used in hybridizing. This is a medium-sized plicata with white flowers liberally washed and dotted violet purple. It set the standard for plicatas for a number of years.

We move on to 1914 and the introduction of Dejazet which at one time was well known. Another short iris of very rich coloring; the standards are a dull rose shading to orange over reddish violet falls – very distinctive and quite lovely. It is very scarce.

Two years later Opéra appeared. One of Vilmorin’s most famous and popular introductions in a very pleasing shade of deep purple, almost wine, it was a novel color for that day. Although not the best grower or bloomer, it is well worth a little extra attention and was still grown well into the 1930s.

1919 saw the appearance of Magnifica, another famous iris although somewhat difficult to describe and sometimes difficult to establish. A very large flower with rhizomes to match, it could be called a bitone with blue purple standards and red purple falls reticulated brown.

Vilmorin’s big year was 1920! At least seven irises were introduced, four of which have survived, including what may well claim to be the most famous of all the firms introductions. Ambassadeur, a tall, stately iris in richest tones of dark bronzy purple, which was still taking prizes in flower shows in the 1940s. If an iris can be called ‘aristocratic’ then surely Ambassadeur merits this compliment.

Two other 1920 introductions are less notable: Chasseur, Vilmorin’s only surviving yellow iris, is neither particularly attractive nor a very good performer. At that, is is a better iris than Medrano, which is extremely slow to increase and reluctant to bloom. it is a dull flower of dark smokey purple.

However, Ballerine, is a much more robust grower and far better bloomer. A large handsome pallida type, it is a soft blue-lavender bitone that is almost a self. this is another once-popular iris that has only recently been introduced into this country.

One last (but not least) Vilmorin iris that has survived is Antarès (1927). This is a small cream colored variety liberally sprinkled with small lavender brown spots and stipples, extremely attractive and different from anything else grown at the time. [ED. Antarès is probably the first tetraploid Broken Color iris in commerce; the first, Victorine (Lémon 1940), was a diploid] Antarès grows well and usually an excellent bloomer.

Vilmorin deserves to be remembered for one more contribution to to the history of iris culture: When the old french firm of Verdier went out of business about the turn of the century, Vilmorin bought out their stock. The firm later introduced some of Verdier’s seedlings, among them the dainty white La Neige, plicata Jeanne D’Arc and the red toned bicolor Prosper Laugier. Unfortunately the famous Édouard Michel has been lost. One might say that iris preservation is not a recent process.

The firm of Vilmorin, Andrieux et Cie deserves much credit for the early hybridization and distribution of lovely and important irises, a number of which grace our gardens today.