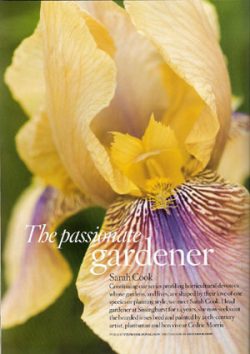 Continuing our series profiling horticultural devotees whose gardens, and lives, are shaped by their love of one species or planting style, we meet Sarah Cook. Head gardener at Sissinghurst for 14 years, she now seeks out the bearded irises bred and painted by 20th-century artist, plantsman, and bon viveur Cedric Morris.

Who was Cedric Morris?

He was one of the founders of the East Anglian School of Painting and Drawing, whose alumni include Lucian Freud and Maggi Hambling. It was a bohemian establishment based in a Georgian house called Benton End at Hadleigh in Suffolk where the pupils lived alongside their tutors. socialising and sharing lively dinners with them and their friends, Christopher Lloyd and Beth Chatto were among the regular visitors. For Cedric Morris, the garden was as important as the house. There he grew flowers that pleased his artistic eye in particular raising, his own strain of bearded irises. He admired them for their “elegance, pride and delicacy”. 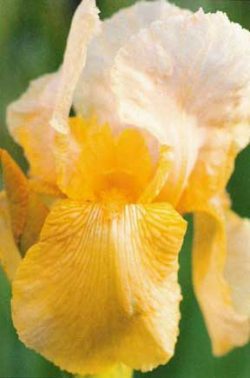 Why did you decide to collect these irises in particular?

When I was seven. my grandmother took me to Benton End where my mother was serving teas for a Red Cross open day. This was an annual event when Cedric Morris auctioned off his surplus iris seedlings in aid of the charity. Thirty years later I found an Iris ‘Benton Nigel’ growing in the borders at Sissinghurst and that childhood memory was reawakened. Cedric Morris irises are unlike most modern bearded irises – the colours are subtler and the falls (the three downward curving lower petals) are elegant and well-proportioned. He bred an enormous range including the first pink iris, I. ‘Edward of Windsor’.

What are your secrets to ensure successful iris growing?

Irises like well-drained soil but they are also heavy feeders, so they do nicely on my heavy soil with the (essential) addition of plenty of grit. Without the grit, there might be problems with rhizome rot. Plant them in a sunny position, but don’t crowd them with other herbaceous plants as they don’t like competition – and they won’t last long in a neglected garden. Snap the stems off at the base after flowering do this by gently, pushing the stems forwards over the rhizome. 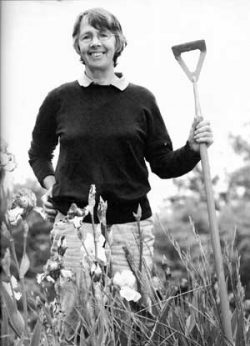 In August, once the leaves have started to die off. cut them back into a fan shape to let the sun ripen the rhizome – then spend the winter praying that the weather isn’t warm and wet or more rot may ensue. After five or six years the plants will need to be divided; however, you will get the best-size flowers if you split them every three years. I feed my irises with a general-purpose fertiliser with added magnesium – rose food seems to work well.

What are your favorite planting schemes?

I think irises look their best grown with old-fashioned roses and peonies – Sissinghurst has some fine examples. You could combine them with old varieties of daffodils and snowdrops or maybe agapanthus to give the border a succession of colour over a longer season. Plant the iris in groups of two or three among the other plants. 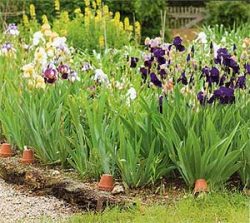 Sarah lives in Suffolk where she is creating the National Collection of Cedric Morris irises with her husband Jim Marshall (formerly garden adviser to The National Trust) who grows fragrant Malmaison carnations. here she relates her horticultural history:

Both my grandmother and my mother gardened… 1’ve had dirty hands since the year dot. I had no particular career in mind when I read geography at Cambridge and I really just fell into gardening. There was an advertisement in Horticulture Week for a job at Kew. Once there, I went on to take the RHS General Certificate in Horticulture and then the RHS Master of Horticulture (this is where I met Jim). I was 27 when I started and I haven’t looked back since. After Kew I moved to The National Trust, working with the legendary Pam Schwerdt and Sibylle Kreutzberger at Sissinghurst, then as head 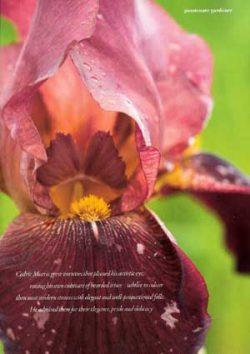 gardener at Upton House near Banbury. before becoming head gardener at Sissinghurst when Pam and Sibylie retired.

After 20 years with The National Trust, I decided to take early retirement when Jim retired. We moved back to Suffolk to be near my mother who. at 85, stiII has her own garden where she grows fruit and vegetable and cultivates a great compost heap. I took the opportunity to start my search for the lost Cedric Morris irises. In my innocence I thought there were about ten cultivars, now it seems there are more like 90! Lots of the local people knew him from when they went to his Red Cross open days and bought iris seedlings, so I have taken to peering over hedges and knocking on doors when I see something promising. The wonderful thing is that they have taken my search on board and have helped me so much. I went to an iris event held by a fellow enthusiast and he gave me a rhizome of all the Morris irises he had. I’m not sure that an acre of garden will prove to be big enough. As insurance, I divide stock plants wherever possible and give them to other collectors in case of disaster. And there’s no point in having a national collection unless you sell a few so I take my spare plants to NCCPG sales (National Council for the Conservation of Plants and Gardens), although needless to say, I have most of the least valuable varieties. 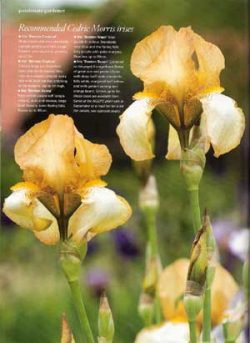 I’m so pleased that Cedric Morris’s work is alive; when I started on my quest, I had no idea how interesting it would prove to be. The growing aspect is one thing. but the detective work and the social side are an unexpected delight. I’m not sure it’s a passion, more like an obsession – which rivals our other passion Ipswich Town Football Club.

~ This article first appeared in Country Living Magazine, July 2008.
For a subscription, go to www.qualitymagazines.co.uk or tel: 0844 848 1601
Reprinted with permission in exchange for this link.