The Iris Compendium of Dr. Kleinsorge: a comprehensive listing of his iris creations and introductions

notes:
Parentage info from original checklists, (punctuation as shown, possibly contains errors), also from Kleinsorge research compiled in the late 1990’s, by Phil Edinger, and notes from the doctor himself.
Most descriptions are from original Cooley’s Catalogs unless otherwise noted, with preference given to introductory descriptions. Some descriptions are composites of two or more years catalog descriptions, and are amended for the additional information they convey
Vintage photos are from Cooley’s Garden catalogs unless otherwise noted. Cooley’s opened for business in 1928, introduced Dr. Kleinsorge’s first iris in 1929, his last in 1961, and unfortunately they closed in October of 2011. Dr. Kleinsorge also intro’d a few of his varieties with National Iris Gardens in Beaverton, OR, Carl Salbach in CA, and a few assorted east coast gardens 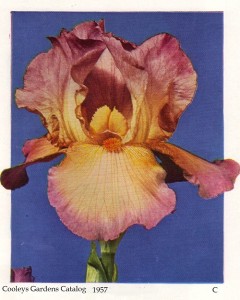 Alline Rogers
R. 1949 I. 1950, TB 34″
“The form of this flower resembles Cascade Splendor, one of its parents, but the color inclines more to pink or rose, with just a suggestion of ashes of roses in its cast. There is considerable gold in the blending of color, especially near the haft. Style arms and beard are both golden yellow. Falls are wide and quite flat. standards upright and closed, the entire flower heavily ruffled. 34 inches tall. Having been admired by the wife of the President of the American Iris Society at the annual meeting in 1949 this Iris was named in her honor.”
Sdlg #373A, (Cascade Splendor X Daybreak), HM 1951.

Anakim
R&I 1934, TB 40″ M, “Gigantic lavender, so outstanding in its color class as to defy all predecessors. Despite its colossal size, the flowers are graceful in effect, well carried on stems over four feet tall. The extremely broad falls are a noticable feature. One of the parents of the new Wm. Mohr seedling, Ormohr.”
(Souv. de Loetitia Michaud X Bruno)
Photo courtesy of Phil Edinger.

Apricot
R&I 1938, TB 36″ M,
“The first iris we have ever known to fully justify such a name. A seedling of Far West, itself a milestone in blended loveliness, this new introduction is solidly colored throughout … a uniform golden apricot self. The individual flowers are of medium to large size, with slight fluting and ruffling in both standards and falls. Height about three feet. One could hardly imagine such color possible in an iris, when seen across the garden, at close range, or under artificial light indoors.” (Far West X Rameses)

Arctic
R 1941 I. 1940, TB 48″ M,
“Here is one of the most beautiful and best Iris originated by this famous raiser of notable seedlings. A new white and gold iris of gigantic proportions in flower, stalk and foliage. Of perfect form, with ruffled but closed standards and broad falls that are as smooth as white enamel. There is an area of bright yellow throughout the center of the flower that reminds one of Golden Treasure, but this iris is gleaming white instead of cream, and the contrast is most striking. Established plants will produce spikes of 4 feet and over in height, with as many as six open foamy flowers at ones time.”
(Red Cross X Birchbark) HM 1941 AM 1942

Auburn
R&I 1945, TB 39″ VE, “This is certainly a new color in iris – at least we have never seen anything like it. The name of Auburn was selected because it seems especially suited to the flower. Both standards and falls are coppery henna-brown, with an undertone of gold, and the falls have a brilliant patch of blue in the center at the tip of the beard. This is a remarkably vivid Iris which glows when seen a block distant. Very early, with 36″ stems. The standards are closed and the falls flare widely. A clump of this iris should create a sensation in the garden.” (Prince of Orange X (258 = Far West x Junaluska)) HM 1946.

Ballet Dancer
R&I 1949, TB 38″ M,
“Resembling the swirling skirt in a ‘pirouette’ this distinctive apricot-tan is another Cascade Splendor seedling and sister of Minuet. Standards large, full and closed. The falls are almost horizontal, very broad, waved and crimped at the rim. Form is only one special attribute…the coloring is delightful–a buffy golden apricot self which carries well. Large & well branched.”
Sdlg #371, (Chamois X Cascade Splendor)
HM 1949 AM 1952.

Bataan
R&I 1942, TB 36″+ M,
“A very dark blend of coppery plum, henna and rich brown. Freshly opened flowers exhibit a very pronounced henna cast, some of which is missing in the illustration. An attractive feature of this iris is it’s rather oval shape, the falls starting to flare widely and then gracefully curving downward and slightly backward at the tips … horizontally oval, not elongated. This provides an eyeful when viewed at any angle. Casting about for a name befitting a flower with colors remindful of peoples of the Far East, we hit upon Bataan, a name that will live long in American history as a symbol of valor and sacrifice. Dr. Kleinsorge again gives us something apart from the usual run of iris colors, in a plant of good growing habits, well branched stalks and flowers above average size. Height three feet or slightly over.”
(((Purissma x Camelard) x ? ) X Aztec Copper)

Beechleaf
R&I 1955, TB 36″
“This seedling of Pretty Quadroon has attracted alot of attention for the past two seasons. It is more ruffled than it’s parent and, while bearing some resemblance because of it’s brownish hue, it is more coppery and is enlivened by a violet undertone. The beard is orange-brown. Very large blooms on three foot stalks.”
Sdlg #419, (Thotmes III X Pretty Quadroon)

Bengali
R&I 1961, TB 36″,
“A large, bright old rose-red self with amber to copper blendings about the haft and near the outer edges of the falls. The extra large standards have heavy mid-ribs which also carry this coppery suffusion plus a hint of green at the base. Beard is a bright bronze-yellow. Note the flaring form and ruffling of the very broad falls. Luminous and bright although deeper in tone than our picture indicates.”
Sdlg #469, (Rose Amethyst X Cascade Splendor)
[Note: As far as I can tell this and ‘Buckaroo’ were the last iris introduced by Dr. Kleinsorge at Cooley’s Iris Gardens, or anywhere else.]

Birchbark
R&I 1940, TB 36″ M,
“Here is one of the finest white irises we have ever grown or ever seen, one of the parents of ‘Artic’ described above, and it should have been introduced two seasons ago. In the meantime the stock has increased so that we can offer it at a fraction of its real value. A very large flower, the falls broadly spreading and with a pronounced rounded shape. Solid clean white, with a cool inner glow. Branching and all habits of growth are just about perfect.”
(Purrisima x Dolly madison) X ? ), [Note: This is the only iris of unknown parentage Dr. Kleinsorge introduced.]

Bryce Canyon
R&I 1944, TB 36″,
“Shown on the cover, a distinct and warm shade of henna-copper. In his efforts to produce an iris of pure henna coloring, Dr, Kleinsorge secured some most interesting seedlings in tones of tan, brown and bronze. Out of this series we selected Bryce Canyon, so named because of the similar colors found in the rock formations of one of America’s most famous tourist attractions. Note the especially broad haft, and finely held standards. … Bryce Canyon achieved instant popularity. Awarded HM AIS 1945; AM in 1947, and is in 12th position in this year’s [1952] list of 100 most popular Iris. Self-colored, with bronze-yellow beard; a huge flower on 3-foot stems.”
(Mexico X Tobacco Road), HM 1945 AM 1947.

Buckaroo
R&I 1961, TB,
“An iris of gigantic proportions, which in both color and form brings to mind the great rodeo spectacles of the Far West. This is a seedling of Toast an’ Honey; larger, lighter in color and with more horizontal falls. These are almost as large as a small dinner plate, very wide and almost flat. Color is a light cocoa-brown with just a hint of violet in the center. Big foliage and heavy stalks are in keeping with the stout-hearted air of this flower.”
Sdlg #470, (Toast an’ Honey X sib),
[Note: As far as I can tell this and ‘Bengali’ were the last iris introduced by Dr. Kleinsorge at Cooley’s Iris Gardens, or anywhere else. No photos appeared in the catalog of Buckeroo.] 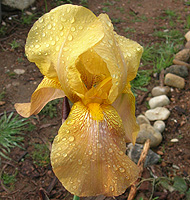 Buckskin
R&I 1939, TB 48″ E,
“Bearing a most appropriate title, this iris is by far the best tan in our entire collection. The stalks rise to a height of four feet, bearing close to a dozen great blooms with large closed standards and wide flaring falls. Practically a self in color, it makes a magnificent companion to the blue of Great lakes. Note the perfection of form in the picture on page 8.”
Sdlg #228, (Far West X Jean Cayeux)