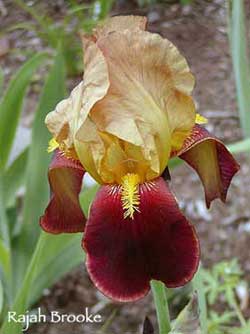 When I think of irises, I think of plants for the sun. Sometimes stately and aristocratic, sometimes happy and carefree and less formal, but always in the sun. But one iris can immediately conjure up visions of romantic adventures in dark, dense jungles bordered by a sea filled with pirates and peopled by tribes both exotic and varied. Complete with daring-do action and mayhem Hollywood would never have dared create for Erroll Flynn; the sort of fantasy a ten year old boy can imagine and dream and playact for hours on end. It’s all in the name. Because RAJAH BROOKE, introduced in 1944 by Luke Norton, instantly sends my mind to the other side of the world

The improbable story of how a thirty-six-year-old Englishman seeking adventure came to be the rajah of Sarawak, located on the island of Borneo, and established a rule which lasted more than a hundred years is remarkable no matter how the tale is told. The version which is most common says that James Brooke offered to help the Sultan of Brunei quell some rebellious indigenous tribes who were in revolt. This rather brash offer resulted in his being given a large chunk of real estate for his own kingdom. It didn’t happen quite like this, but it is much closer to being the real tale than most romanticized variations of actual historical events that catch the popular imagination. It wasn’t really the sultan who Brooke dealt wilh, but one of his potential heirs. Also, Brooke was pressed by the sultan’s representative on more than one occasion before agreeing to get involved in the matter. He was well aware of the reward being suggested and had serious and well founded doubts about the authority of the sultan’s representative to make such an offer. Nonetheless, he did successfully accomplish the task and insisted on his right to be given his reward, to which the sultan eventually agreed As a result, on November 24, 1841, one James Brooke was named Rajah and Governor of Sarawak.

And what a land he acquired! A land peopled with multiple tribes, some more peaceful than others, but all with highly developed and individual cultures ranging from nomadic forest dwellers to tribes with highly developed social structures. This was the land of longhouses and headhunters. Tattoos and body piercing were identification, clothing and decoration. Some dwelt on the coast and were seafaring folks, others were agricultural and some were hunters and gatherers with no fixed territory. All were unique and were constantly at war with one tribe or the other. The sea bordering Sarawak is the China Sea, a constantly angry body of water and rife with pirates until even late this century. And the jungle! Even today a tourist or traveler can get lost just by wandering a few feet into the mass of dense vegetation and have to be rescued by the descendants of the tribes who have called it home for centuries.

Rajah James Brooke was just the sort of romantic hero the tale requires. Handsome, he possessed a large quotient of charm and personality. He also had a rather lackadaisical attitude toward authority and how it should be implemented The result was a person who consistently acquired the affection of the people he was to rule and of the Europeans who were to assist him. It was well for him because he was also a bit vain, frequently touchy and often inconsistent. Even better for those who like history, he was imprudent and had the habit of writing down his thoughts and observations and letting the rest of the world share his current opinion. This caused him grief and trouble from time to time, but also allows a better look into his personality. He was not a good fiduciary, but was genuine in wanting what was best for the people he had come to rule. These qualities set the tone for the path Sarawak was to take for duration of the rule of the white rajahs. For his time, he was pretty enlightened in his attitude toward the indigenous peoples and in return they gave him affection and not too much trouble They had a history of worrying about their neighbors and a European rajah was a pretty neutral entity It had the effect of being a stabilizing factor in their constant quarrels with each other. It also allowed the first Rajah Brooke to implement the process of educating the tribes into more acceptable patterns of behavior without using the all-too-common methods of force and extermination. James Brooke never married and left no legitimate children to inherit his title, so when he died in 1968, he had named his nephew Charles as heir.

And what of the second Rajah Brooke? A cursory scan indicates an austere man. His demeanor was severe and there is little evidence of humor. He was an able administrator. He did not inspire the affection given to the first rajah, but did inspire respect, which served him equally as well and perhaps even better when it came to ruling a country. On close examination, however, he proves to be an intriguing and complex character. He was a nephew of James’ sister and had the surname Johnson. He came to Sarawak with a brother named Brooke who was to be the rajah’s heir. He promptly moved to the uplands of Sarawak and for the next sixteen years he lived and worked with the indigenous people. During these years he had very little contact with any European. These years are relatively obscure to historians, because unlike James he was not imprudent and kept his thoughts to himseif. What he gained was a depth of understanding of the people he came one day to rule, an understanding rarely achieved by westerners with his background and education. He cared deeply about the native population and continued with the process of education and gentle direction established by his uncle before him. Yet he still seemed to need the appearances of the very proper British way of life. He built Istana, and this magnificent home is the governor’s residence today. He married and had a family. But still at times he would travel and stay for weeks with the people with whom he had resided for so many years. His name was changed from Johnson to Brooke at his uncle’s request when he inherited the title, but he also changed his wife’s given name. His brother Brooke had a charming personality much like that of his uncle, but when James and Brooke had a falling out and Charles was named the new heir, Charles came back from the corner of Sarawak and made the transition to rajah with little fanfare. He then set about doing the iob with dedication and considerable ability. The dual aspect of his personality is there but what he left on record was his administrative ability. This skill was applied for forly-nine years until his death, when his son Charles Vyner Brooke became the third Rajah Brooke.

Charles Vyner Brooke, the third rajah, took the title in 1917. Like his great uncle before him he was handsome with loads of charm and personality. Also, like his great uncle he did not excel in fiduciary matters. He spent a good deal of time in England, Europe and the United States. This was against the expressed wishes of his father who had requested that his sons spend the greater part of their time in Sarawak. These absences did not seem to concern his subjects a great deal. He was well liked and the offhand manner of authority his great uncle had established gave the actions precedence. And, like his great uncle and his father, he had the best interests of the people he ruled in his heart even if his administrative ability was somewhat inattentive. Also, the world had moved into the twentieth century and Sarawak’s indigenous people still maintained cultuial habits which appalled the majority of the world. These habits would continue to be an impediment toward becoming a modern, self-sustaining country. The third rajah recognized his inability to organize and administrate and began moving toward self-determination for the people of Sarawak. This process was slow, but steady. It was interrupted by the Japanese takeover of most of Asia during World War II. This was a brutal time for this part of the world and Borneo was no exception. It was during the Japanese hold on Sarawak that the last vestiges of head hunting finally died completely. The area was also wracked financially. With the end of the war, there was no hope of Rajah Charles Vyner Brooke being able to salvage Sarawak as his own country. It was beyond his ability. There was no push within Sarawak to remove him. He remained popular, but in his mind he felt England could do for his people what he could not and in 1946 Sarawak was ceded to Britain and became a British colony until it was established as a state of Malaysia some years later. It is a measure of the white rajahs that this move was greeted with more puzzlement than joy. In fact the end of the rajah’s rule is still considered by many to have been too hasty and hurried to really have been in Sarawak’s interest It is not said, even by his worst detractors, that the last rajah made the move in anything other than the interest of Sarawak and its indigenous people. Charles Vyner Brooke died in 1963; his widow Sylvia, the second Renee of Sarawak, in 1971

I don’t know which rajah inspired Luke Norton to name an iris RAJAH BROOKE. Perhaps he was naming the iris for all three rajahs. It’s possible he even knew the third Rajah Brooke. They would have been contemporaries. But when I saw the name in an iris catalog, I knew it was an iris I wanted to grow. Sarawak is an exotic land to any western eye. Today it is still possible to visit a longhouse and see heirloom skulls collected by the ancestors. The Penan group still resists settling in one place and roams around the forest, clinging to a way of life from the past. The China Sea still churns it angry water on the Sarawak shores. The jungle is awesome and intimidating, filled with plants far removed from a civilized iris cultivar. Hornbills still call the jungle home. One can learn how bird’s nest soup is made from the saliva used to make a mud swallow’s nest or play a game of tops made with ironwood from the jungle. One can get on a raft-like boat and pole through the jungle on canals that still serve as roads in much of Sarawak. Much still left to view and enjoy is a legacy of the white rajahs because, each in his own way, respected and treated with affection the indigenous people they came to rule. I don’t much care what the iris looks like, the name is enough to awaken the ten-year-old boy in me and send my mind and my imagination soaring What’s in a name? Stories, adventures, mystery, exotic lands and animals if the name is RAJAH BROOKE.