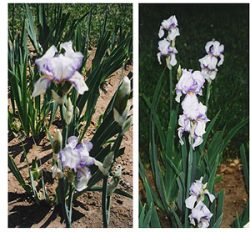 The fragrance of ripe grapes is carried along on the spring breeze. With no arbors along this country lane, what could be the source of this wonderful aroma? Look, there by the old farmhouse are dozens of slender-stemmed graceful flowers. It’s an iris! – a very old iris, fragile and regal, each white petal stitched in lavender-blue. The lower part of the falls curl in on each side, creating the illusion of a point. You don’t have to bend to smell this iris. The flower’s fragrant aroma simply envelops you.

It’s the Iris Swertii, a very unromantic name for a romantic looking flower. First collected and catalogued in 1612, Swertii is one of the oldest iris which still exists today. It is second only to I. Florentina and I. Pallida which were known in the 1500’s. You will never find Swertii’s name as an award-winning iris because it is a antural hybrid, parentage unknown, courtesy of God and a honey bee! Iris Swertii is truly historic.

What makes an iris historic? The test of time identifies an historic iris as one that is vigorous, multiplies, resists disease and adapts to soil and climate. Officially, it must have survived at least 30 years. Swertii is an acknowledged 395 years old this year plus however many unknown years this natural hybrid was tucked away in the wild.

An historic iris must also have enough charm and beauty to be desirable to the scientific collector, the connoisseur of fine flowers and the home gardener. Emanuel Sweerts, Dutch artist, botanist and merchant of rare plants, came upon this little charmer on one of his flower collecting excursions in meadows and woodlands off the beaten path from Amsterdam. He was so enraptured with its gentle beauty that the very name, Iris Swertii, actually means Sweerts’ Iris. He dug up an iris clump, took it home to his own garden and cultivated it until he had rhizomes to sell as a rare and exotic flower.

At least one copy and some hand-colored flower prints still exist of Emanuel Sweerts’ 1612 illustrated catalogue for plant sales at the Frankfurt Fair. Five other editions of his Florilegium were printed in Amsterdam between 1620 and 1645. Editions printed in 1620 and 1631 are for sale to the tune of $40-51,000 from a dealer in rare books in the Netherlands. Individual pages of flower prints sell from $900 up to $4,500 for a framed pair. The rarest and most sought after deluxe edition of the Florilegium is the 1645 volume. Only two copies are identified at this time; one is part of Leichtenberg Collection in a museum in Germany. One is for sale at an unlisted price.

Emanuel Sweerts’ Florilegium is no ordinary book. 1620-1645 editions were printed on heavy vellum (calf skin) from copper etchings, bound and hand-colored by the publisher. The book is fully illustrated with Sweerts’ botanical art, featuring 110 engraved plates with 560 images of plants, each hand-colored.

Names of artisans who created the copper plates and colored each printed page are unknown. Emperor Rudolph II is believed to have commissioned the book. Sweerts’ dedication page acknowledges that the Emperor “tried unsuccessfully to entice Sweerts to join his court at Prague as director of the royal gardens.” The book’s dedication, prefaces and indices are printed in a multi-lingual format of German, Dutch, French and Latin. There is an engraved image of Emanuel Sweerts, renown floriculturalist and botanical author. The full page cover is a detailed allegorical drawing with a lengthy title.

Iris Swertii is a well-traveled little beauty, gladdening the heart in unexpected moments and places, having made itself at home in a tremendous diversity of climates and soils. Very early it was transplanted to the gardens of kings and queens, lords and ladies. Eventually Swertii found itself at home with adventurers and common folk, many of whom brought it with them when they left the Old World for the New. Swertii is featured on a postage stamp for Bernera Island, off the coast of Scotland. It grows in every state of continental USA, border to border and shore to shore. Swertii is also alive and well in France, Germany, Japan, Holland, Russia, and the United Kingdom. Often it is unrecognized by name, but is still loved for its delicate beauty and marvelous perfume.

This particular iris has been in my family so long that its name was lost through generations of time. We simply called it the “grape iris” and considered it a beloved family heirloom. We know that it came by boat from Germany to Maryland in the 1700’s, jogged the miles in a covered wagon from Maryland to Ohio Territory in the early 1800’s, and jounced along in a car trunk in the 1970’s for the journey to Georgia. This year, 2007, the name and history of our family treasure has been discovered anew!

When beautiful little Swertii blooms, you can close your eyes and smell the grape clusters hanging from the arbor just over your head. You will have to go to the grocery store to actually put your hands on a cluster of grapes, because this wonderful aroma is from the delicate little white iris trimmed in the color of blue grapes. May it live forever!