Wychnor
A New Zealand Story, by Stephanie Boot, NZ
With Acknowledgement and Thanks to Patricia Forsyth and John Vickers 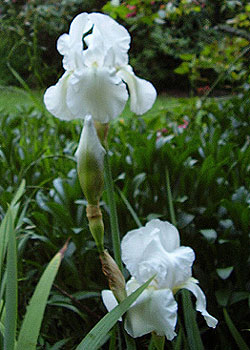 This beautiful white iris has been grown in New Zealand since it was introduced on behalf of Pattie Levett by Stevens Brothers in 1946. However, it was not registered prior to introduction, nor was it in subsequent years, until 2006. The 2006 National Convention of the The New Zealand Iris Society was hosted by the Rangitikei Group of the Society, and to mark the occasion it was decided to register Wychnor, as the small town of Bulls in the Rangitikei area was where it was bred.

From the Steven’s Bros. catalogue for 1946-47: “An Excellent pure white of clean cut rounded form and remarkable substance. Of largest size, the flowers have that new quality of clean even texture we are coming to associate with the newest irises. Very free flowering and an excellent doer.”

So, what’s in a name? The word wych has its origins in the Middle English word wiche, from the Old English wice, meaning pliant or supple. It is best known as the name of the Wych Elm Ulmus glabra Hudson – a large deciduous tree, native to Europe, Asia Minor, and the Caucasus, occurring as far north as latitude 67°N at Beiarn in Norway. In the British Isles, it was by far the most common elm in the north and west of the region. It was occasionally known as the ‘Scotch Elm’; the name taken from the Gaelic Lac Leaman, or ‘Lake of the Elms’, because it was formerly abundant in Scotland.

Wychnor or Wichnor itself, is situated about halfway between Burton-upon-Trent and Lichfield, close to the river Trent and the Trent & Mersey Canal in Staffordshire, and Wychnor is the name of the English estate which was the ancestral home and family seat of the Levett family. Mentioned in the Doomsday Book, this feudal holding was in a part of Staffordshire at that time extensively covered by the Needwood Forest, over which the Dukes of Lancaster, descendants of John of Gaunt, had hunting rights. There is no doubt these royal parties stayed at Wichnor, one of the available lodges. To this day there is still a magnificent carving hanging in the Hall, of a flitch of bacon. It commemorates the real thing, granted to Sir Philip de Somerville by John of Gaunt in 1337, to be the given to couples as a reward for a year and a day of marriage without a quarrel! Having been presented only three times over as many centuries, it was replaced by the carving.

The Levetts have traced their ancestry back to Lionel, Duke of Clarence, and brother of John of Gaunt, in the mid 14th. century, down through the murders and intermarriages and dynastic marriages of the days of the Plantagenets, and later through the titled landowners of England. Though not seeming to have made their mark in any of the fields favoured by the upper classes, they married into wealthy and influential families. The exception was Theophilus Levett, 1693-1746, son of John, who was Town Clerk of Lichfield, and entertained Samuel Johnson during his youth there. Samuel Johnson also mortgaged his mothers Lichfield house to Theophilus Levett in 1740.

The Levett family flourished and in 1745 Theo’s son John acquired the magnificent estate of Wichnor Park, the existing hall having been built about fifty years earlier. Another John Levett, who was possibly the grandson of the former John Levett. and son of a Theophilus Levett who was High Sheriff of Staffordshire, was the patron of the painter James Ward. John features in two large paintings of of Wychnor Park painted in 1812 and 1817.

Wychnor is now The Wychnor Park Country Club, where one can stay in either the impressively grand main hall, an apartment in the stable block or in a cabin in the grounds, and where there are recreational facilities to suit everyone. There is also a little church which is part of the estate.

And so to New Zealand – The Levett family and ‘Beccles’, their home in Bulls. To cut a long family history shorter, two descendants of John Levett, the eldest of six sons and one daughter, Chas. Arthur and Edward Harry, emigrated to New Zealand in 1881 on the Waitangi and, without any experience, set about farming in the Rangitikei district.

Ned Levett died on Nov. 1st 1930, and his wife Nina on June 22nd. 1932. The two daughters, neither of whom ever married, lived on there in very difficult circumstances, but they had their wide circle of supportive friends, their fowls and their productive vegetable garden. They were tireless in supporting St. Andrews Anglican Church, and working in the large garden, particularly among the bearded irises which their mother, and they themselves bred successfully. (‘Wychnor’ came from 1938 seed, and Pattie also registered the beautiful ‘Nina Levett’ in 1939, which received an AM in 1941.)

Pattie died first in 1963, at the age of 67, and Olga stayed on until 1970, when she was nearly 80, although her last years were handicapped by a stroke. Pattie had spent 1926 in North West India, largely with her lifelong friend Alix Free (nee Perry) whose daughter, Patricia was her god-daughter, and who made Beccles her second home.

The property was left to Patricia, now Forsyth, who lived there with great pleasure for the next quarter of a century. It is now owned and loved by another family.