Comments here are those of the Shaub Dunkley, the PBF Survey Coordinator.

The iris photographs here show various PCT. Faint but notable purple in a specimen can be exaggerated or rendered undetectable in photographs. Specimens showing no purple to the eye in the field can appear to have discernible purple in a photograph. When the question is, “Do you see purple, yes or no?” the answer based on direct viewing and answer based on photograph can be opposite. This highlights the reason the PBF Survey asks for determinations to be made by direct visual check rather than later by examinations of photos.

Color-impaired vision presents challenges for some. I have red-green “color-blindness”. There are situations where I see or ‘think I might’ see some slight purple in an area and a normal sighted people will tell me the saturation of blue-green or green is higher there but there is no purple. Thus there is a sort of red flag pattern I can recognize and not report my determination on these. This doesn’t happen often and I can get someone who is normal sighted to look at those. I’d love to hear from others with color-impaired vision about their general experiences with trying to assess purple colorations.

I’ve very limited experience looking for purple-rhizome (PR) and purple-ringed rhizome (PRR). My understanding it that they both occur more frequently in the small dwarf bearded (SDB) class than in the other classes. You have to excavate around the rhizome or perhaps even dig it up and wash it to reveal the purple. Photo 8. points out what I believe to be PRR. But I don’t think any show true PR. If we have any PR/PRR enthusiasts out there the PCT Project would love to have you as a resource. Indeed, this goes for enthusiasts for anything PCT. I don’t have any photos of PCT as found in the beardless and species irises. If anyone could contribute those we could add them to the set.

Looking for PR and PRR I became more aware of “hidden” PBF. This form requires that you remove some outer leaves to reveal developing leaves with distinct PBF. From the outside the iris may look to have no PBF at all unless you look for this “hidden” form. Which places the PBF Survey in a quandary. As a practical matter, as Survey Coordinator, I’m reluctant to ask PBF Survey participants to look for such hidden PBF. But as a categorical matter PBF is PBF. I haven’t decided on which way to go on this but for now the PBF Survey is not asking participants to look for hidden PBF. If they wish to do and find it they should submit that data as a separate report listing of iris names. The main PBF Survey data should represent only irises where PBF is visible from the outside.

Most of the photos are made by myself. Photos 1, 2, 4, and 7 are courtesy of Nancy McDonald. Photo 14 of the iris with the striking purple stems is from Mary Hess (Bluebird Haven Iris Garden). The iris is a noid. Mary would love to think she can identify it to a cultivar but hasn’t been able to do so as yet. All markups of the photos have been applied by myself. 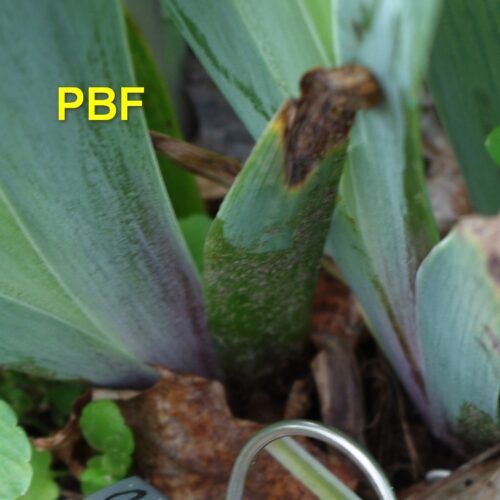 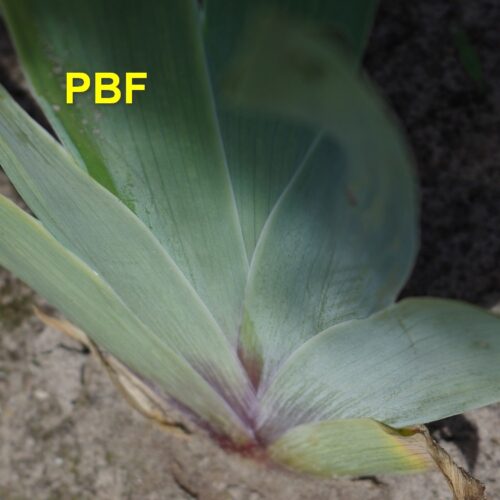 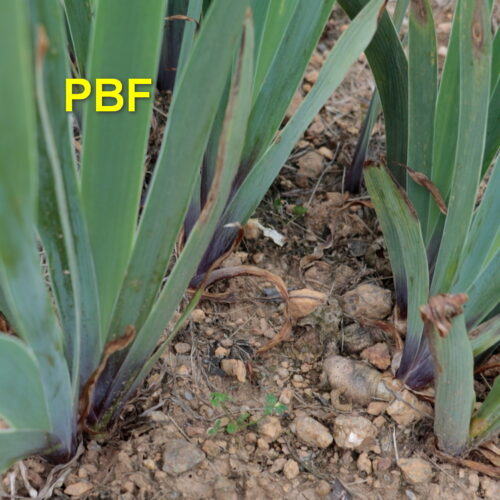 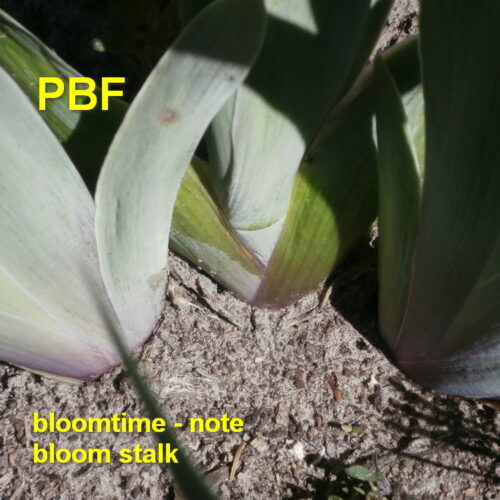 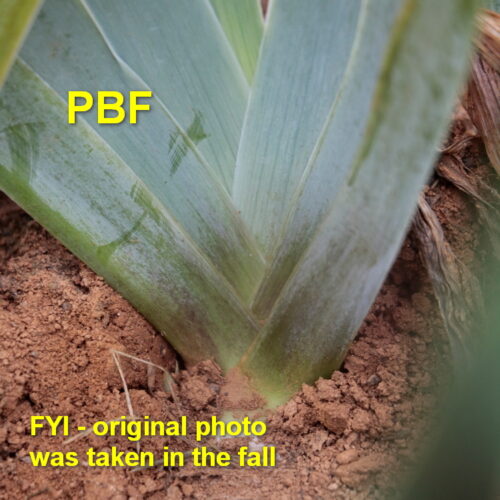 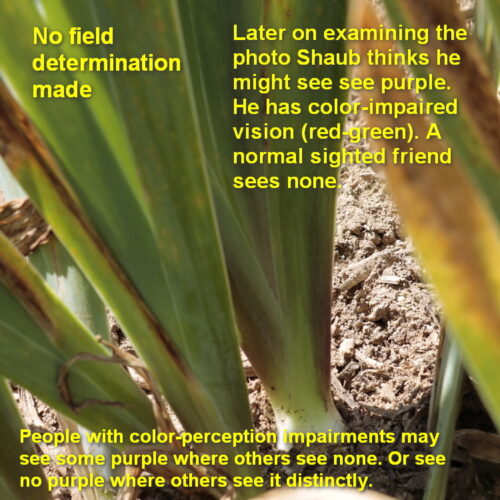 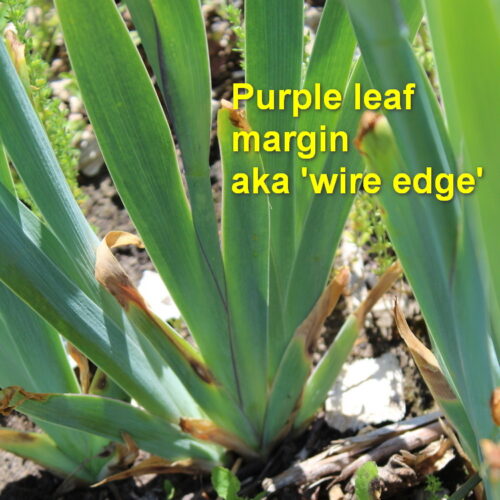 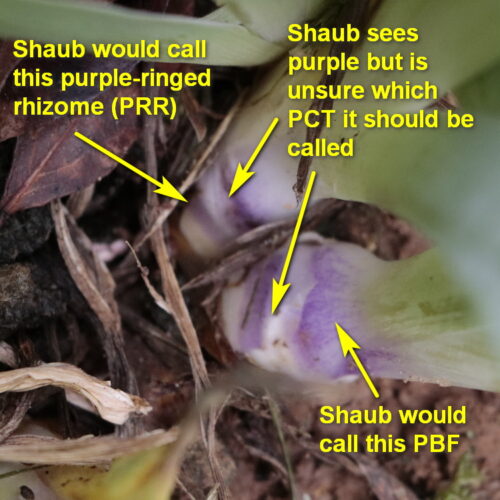 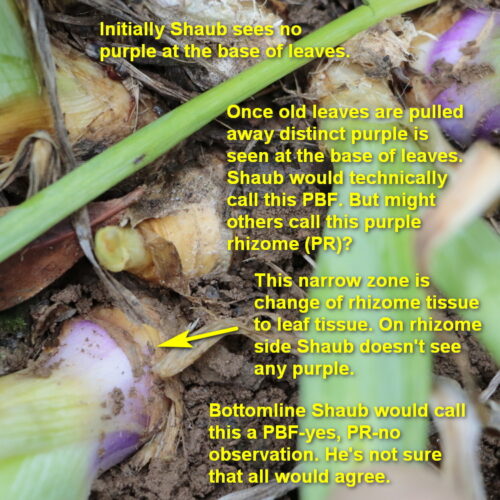 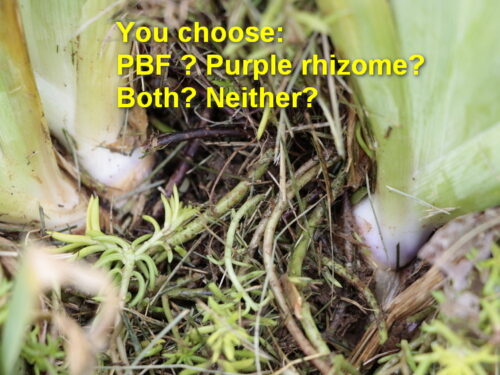 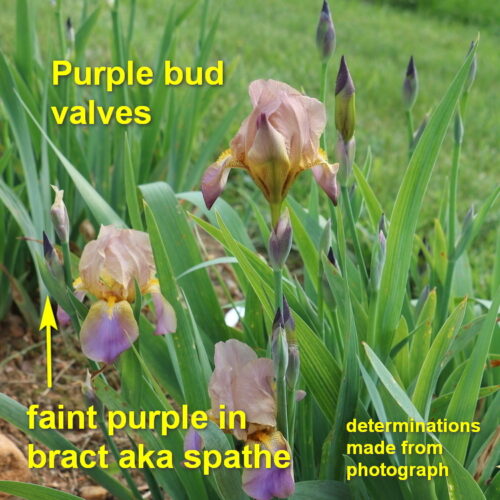 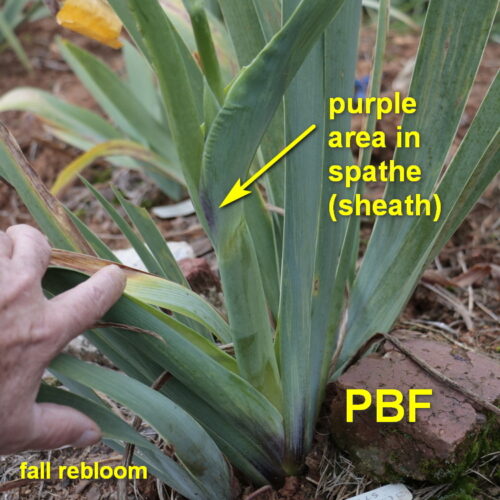 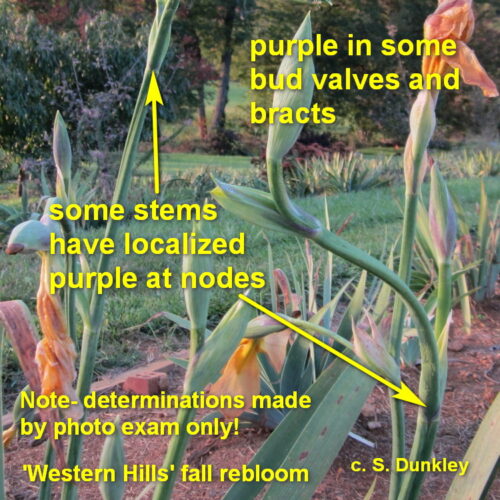 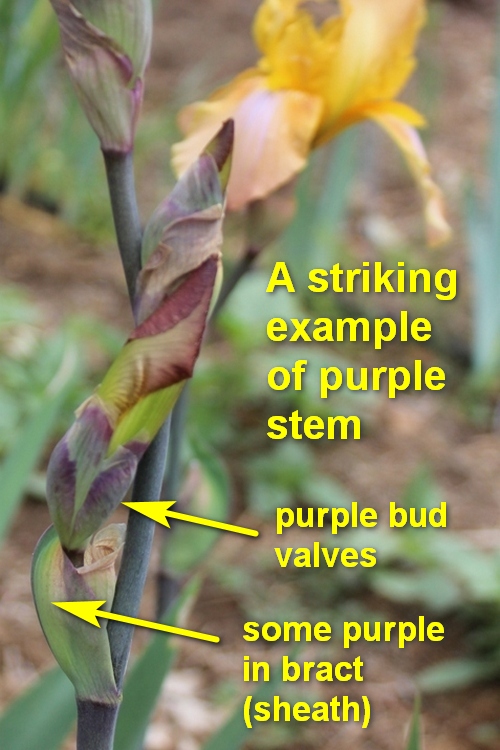