Home > Who We Are > History of HIPS

Irises, like anything else, are subject to the whims of humans. Our thirst for the “next new thing” can result in the permanent loss of treasures from our past, and in 1984, a group of iris lovers realized that was exactly what was happening in the world of irises. Old varieties of irises were disappearing at an alarming rate. The focus among most of the AIS members was on modern irises. The 1939 Checklist, a definitive source for preservation, was out of print with no plans to reprint it. Something needed to be done before our iris heritage was lost. 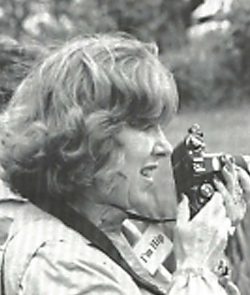 Carolee Clay (left), an AIS member from Wisconsin, took on the task. At the 1984 AIS Convention in Seattle, a group of historic iris enthusiasts met to discuss the formation of a new group, tentatively called the Historical Iris Preservation Society, or H.I.P.S. There was a great deal of interest and plans were made to meet again in Indianapolis at the 1985 convention, where hopefully the group could progress toward official recognition.

Carolee described her love of historic irises in an article in the Summer, 1985 AIS Bulletin:

“I have collected four historical irises this past year. Two were found growing in the weeds while driving on country roads. The third was found in the rubble of a demolished old cottage next to a park, while hiking, and the last one next to the parking lot of an old lighthouse in northern Wisconsin while on a short vacation. It was covered by leaves and twigs and was being walked on by all who toured the lighthouse. It had a network of rhizomes under the leaves and the piece I collected had not bloomed in nine years. The research I did on the occupants of the lighthouse lead me to believe that the iris had been planted prior to 1916. Irises were also found growing in two other spots on the edge of the clearing, wrapped around rocks, in leaves and moss. They had survived like this for many, many years. Will any of our new irises withstand this survival test of time? We are awaiting bloom on our collected historical irises this spring. It’s almost like waiting to see a new seedling bloom for the first time. Then, the mystery of identification will begin. There have already been people inquiring as to whether I have a certain variety that they or their mother or family member used to grow. So, just as the “old ones” are being resurrected, so is the interest in historical irises.”

By the time this piece was published, the second meeting of interested HIPS members had already taken place in Indianapolis. The fledgling organization received a shot of additional energy in the form of Mike and Anne Lowe, and charter members signed on at the convention. The next meeting took place at the 1986 convention in San Jose, California, and more charter members were accepted, plus six membership regions were proposed. Carolee Clay acted as the Interim President. Brian Clough offered to write a draft set of Bylaws for the 1987 meeting in Phoenix. This 1986 convention is later referred to as the date when HIPS was formed.

When 1987 rolled around, HIPS members gathered in Phoenix for the annual AIS convention and the next meeting of what was still called the Historical Iris Preservation Society. Brian Clough presented a draft set of Bylaws but no action was taken. The minutes of this meeting were lost, so we aren’t sure what transpired but in 1988 HIPS was ready to push forward. The convention moved to Oklahoma City, and at the HIPS meeting there, things started to happen.

Anne Lowe was chosen to be editor for the new HIPS publication, ROOTS. HIPS was not yet an AIS Section; the Bylaws were not ratified, and in fact had not even been presented to the members yet. Mike Lowe volunteered to find out what was needed to become an official AIS Section. The membership now numbered 63 people, and Verona Wiekhorst offered to take over as Treasurer. Carolee Clay continued as President Pro Tem, with Brian Clough as Vice-President. 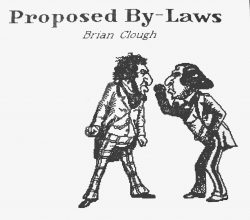 Volume 1, Issue 1 of ROOTS burst onto the iris world in the Fall of 1988. Anne Lowe had indeed put together a stellar debut publication. HIPS now had a full complement of officers and standing committees, including Display Gardens, Membership, Variety I.D., Slides, and Yearly Sale. All of these continue to be an important part of HIPS. Features included the Sass Memorial Iris Garden and an article on national plant collections in Britain, plus the anticipated report by Mike Lowe. In a nutshell, HIPS was well on its way to Section status but the Bylaws needed to be adopted, and the organization needed to incorporate. This inaugural issue of ROOTS contained the draft Bylaws, accompanied by a drawing of two men getting into a fistfight. Was this a hint of what lay ahead?

Perhaps. Over the winter, a flood of suggestions arrived on how to modify the Bylaws, mostly involving making them simpler. A new and improved draft was published in the Spring, 1989 issue of ROOTS well ahead of the annual meeting.

On to Memphis, and the 1989 AIS Convention. At the annual meeting, HIPS became an official organization, the Bylaws were approved, a Board was elected, and six geographic regions were established with a director for each one. Anne Lowe was elected President. HIPS now had 225 members, and plans were set to request official Section status at the AIS Fall Board Meeting. There was a bit of wrangling over the official name of HIPS; since the irises were historic, not historical, the official name was changed to the Historic Iris Preservation Society.

It had taken five years of work, but by the end of 1989, the newest Section of the AIS was firmly established and has continued to grow ever since.

A few milestones along the way:

• The Spring, 1989 issue of ROOTS contained an article by ID expert Phil Edinger titled, “I’m Sorry, I Didn’t Get Your Name…”, a reference so comprehensive and important that it’s preserved in the library of the HIPS website and can be downloaded. Anyone interested in trying to identify an iris should start with this article.
• HIPS began holding an annual rhizome sale in 1992, with Larry Harder at the helm. In 2016, this became an online sale and has continued with great success.
• In 1996, HIPS started a website. Mike Lowe was the first webmaster and built the site into an attractive and informative portal for those interested in historic irises.
• The Fall, 2001 issue of ROOTS became the first one printed in color, and in 2005, it was printed on glossy paper with a colored cover. Mike Unser became webmaster for a new HIPS website, which has since been revised again.
• The Guardian Gardens program was formed in 2014 under the aegis of HIPS, with 11 members. It has since grown to 200 members preserving over 2,000 cultivars of rare historic irises. Irises are grown, divided, and shared with other members of the program. Eventually they are established enough that they can be shared with public gardens, commercial vendors and the HIPS rhizome sale.
• The Breeder Collections Program was initiated in 2018 as another avenue to preservation. Members are encouraged to hold collections of irises by their favorite iris hybridizers and report their holdings to HIPS annually.

Today, HIPS is well over 800 members strong, committed to preserving our iris heritage. Our success in saving the past means the future looks bright!